Some updates from last year. First, the first game I ever worked on professionally, Alfa-Arkiv, was featured on the Apple App store. CNET did a behind-the-scenes on this strange, 10-year project. CNET also named Alfa-Arkiv one of the best mobile games of 2014!

In other news, Elliot Quest, I game I wrote the script for, was released on Steam in December. It’s coming to Nintendo Eshop soon! https://www.youtube.com/watch?v=MTlWYbapmFw&feature=share … 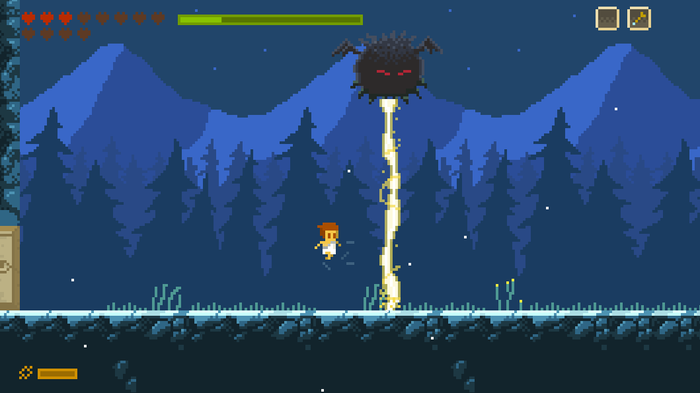 Ave et salve–hello and farewell–was a Roman greeting when two travelers passed each other on a road, perhaps heading from one corner of the extensive  empire to the other. The greeting conveyed both a sense of genuine comfort in seeing another soul, and also the reality that the vastness of the empire meant that the two would likely not meet again. The video game Dark Souls is so vast that you’ll likely never meet the same player twice.

With the upcoming release of Dark Souls II, I thought I’d revisit why the original Dark Souls singly reinvigorated the action-rpg genre, and made me believe in video games again–strong statement alert! Like many people, I grew up playing the Zelda series. The original NES Legend of Zelda through the SNES A Link To the Past allowed players to explore without being burdened by excessive dialogue. Yet there was narrative to be found everywhere—with the exception that most of this narrative was created by the player.

this is definitely not Zelda

But as the series continued, traditional cut scenes and dialogue came to replace the more passive narrative of its predecessors—until the recent long-awaited sequel Link Between Worlds, Zelda had become overburdened with unnecessary tutorials, constant narrators, and generally “told” the story rather than “showed the story,” to use a common fictional wisdom.

For those who haven’t played Dark Souls, its premise is still standard fantasy. Imagine middle earth had Sauron taken over, and his darkness spread to the four corners of the map. But the world of Dark Souls is desolate, dreary, and largely abandoned, a fact you’re reminded of not by characters constantly griping about evil but in the gameplay itself.

Perspective is everything, isn’t it?

Save points take the form of bonfires, which when approached are little more than kindling and need to be lit. Lighting a bonfire saves your progress, but not your souls (the currency for purchasing items, and upgrading both equipment and your stats). But the catch is the thing—resting at a bonfire heals you, but also revives most common enemies (with the exception of bosses and a few special foes).  You feel both excitement upon reaching a bonfire (because Dark Souls is a retro-difficult game), and dread—a well-trodden path hardly exists, and even at later stages of the game early enemies still pose a threat.

The story of Dark Souls would be nothing unique–if not for the bonfire mechanic, which constantly reinforce the idea that the flame of humanity has all but been extinguished. Still, perhaps Dark Souls would be an isolating experience if not for its brilliant online mechanic. Throughout your game, the hollowed ghosts of other players enter and leave your world . Glow red tags mark player messages that warn you of difficult monsters and provide hints on secret passages and treasure, or strangers might join you to defeat difficult bosses. Often this strange ghostly community turns hostile. They invade to kill you and steal souls. Such is life…and death. Despite the occasional angst at being invaded at the worst possible time, this online mechanic reinforces the bonfire theme. Salvation is far away, and destruction nips at your heels–not that there are heels in the game–though your armor can sometimes get fabulous…

This solitude of Dark Souls is welcoming at times, but the trials and tribulations of fellow players are never far off. Bloodstains depict how those who came before you died, and often at a long-awaited bonfire, you’ll see another lost soul rise and disappear down a trail.

This site uses cookies. By continuing to browse the site, you are agreeing to our use of cookies.

We may request cookies to be set on your device. We use cookies to let us know when you visit our websites, how you interact with us, to enrich your user experience, and to customize your relationship with our website.

Click on the different category headings to find out more. You can also change some of your preferences. Note that blocking some types of cookies may impact your experience on our websites and the services we are able to offer.

These cookies are strictly necessary to provide you with services available through our website and to use some of its features.

Because these cookies are strictly necessary to deliver the website, refusing them will have impact how our site functions. You always can block or delete cookies by changing your browser settings and force blocking all cookies on this website. But this will always prompt you to accept/refuse cookies when revisiting our site.

We fully respect if you want to refuse cookies but to avoid asking you again and again kindly allow us to store a cookie for that. You are free to opt out any time or opt in for other cookies to get a better experience. If you refuse cookies we will remove all set cookies in our domain.

We provide you with a list of stored cookies on your computer in our domain so you can check what we stored. Due to security reasons we are not able to show or modify cookies from other domains. You can check these in your browser security settings.

We also use different external services like Google Webfonts, Google Maps, and external Video providers. Since these providers may collect personal data like your IP address we allow you to block them here. Please be aware that this might heavily reduce the functionality and appearance of our site. Changes will take effect once you reload the page.